Norman’s Dance with Life and Death

Norman enjoyed good health for most of his life but when he suffered from an aorta embolism at the age of 91 years, back in the year 2000, many of us thought that Norman’s dance with life had come to an end, and at a grand old age too.

He was rushed between local hospitals and then at Hammersmith they were ready to operate.

‘What are his chances?’ his son asked the doctor after Norman’s surgery, looking down on a frail man with wires and tubes everywhere.

Against all odds Norman pulled through and here he is recovering. He thought he’d been 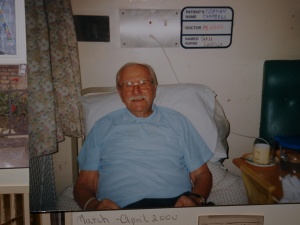 in a car accident until a nurse told him that his main artery had burst.

She added, ‘While you were in surgery they had your heart out on a slab while they mended your artery. What do you think of that, Norman?’

I don’t know what he replied to her but I expect, knowing Norman, he winked!

I asked Norman once if he knew why he’d been blessed with longevity.

He replied, ‘Well I hardly drink, gave up smoking years ago, always eat a healthy meal and I keep myself going.’

‘How do you do that Norman?’ I replied.

‘When it’s nice is I go and sit at the top of the garden. I love my garden and being out in the fresh air and sunshine is good for me. If it’s not warm enough I often sit in the conservatory to be in the light. Also I still get out and about by myself on my scooter. I go to Surbiton, even Kingston sometimes.’

‘But that’s several miles away, Norman, and busy roads too.’

‘Well, I go along by the river and when I get there I stop in the park. I always take a spare battery you see, so I change the battery over, have a bit of a sit and then come back home.’

Just after that Norman excused himself and went upstairs. It was in a bit of a shuffle because by now he didn’t find walking very easy. I heard the toilet flush and headed to put the kettle on as I heard him shuffle back downstairs.

As we sat down for a cuppa I was curious, ‘Do you mind me asking why you go all the way upstairs when you have a downstairs toilet?’

‘Not at all,’ he said. ‘I do it for the exercise. It keeps me fit, otherwise I’m just sitting all the time.’

How many of us would take the easy way out instead.

Author of 'Mystery Inspired by History' series,' 'Inspirational and Motivational' series and 'The Riduna' series, historical romantic fiction set in 19th and early 20th Century. Member of SOA. Websites: www.dianajacksonauthor.co.uk www.dianajacksonauthor.com Blog:www.dianamj.wordpress.com Riduna on Twitter and DianaJacksonauthor on Facebook too! To get in touch email: diana@dianajacksonauthor.com
View all posts by Diana Jackson →
This entry was posted in Early 21st Century, Life and Hope, Memoirs, Norman, The Life and Demise of Norman Campbell and tagged aorta embolism, burst artery, elderly keeping fit, Operations late in life, The Life and Demise of Norman Campbell. Bookmark the permalink.